Virat Abused By NZ Skipper In Hindi & He Didn’t...

In the ongoing test match between India and New Zealand, something unusual happened. A foreigner uttered the word that unites different languages in India – Bh*****d.He abused virat with a slang which is taught by virat himself.

Ross Taylor, the NZ skipper was unhappy when an LBW appeal against Virat Kohli was turned down by the umpire.

Now, as a skipper, you tend to get frustrated if you miss out on an opportunity to get Kohli out.

An elongated FUUUCCKKK from Taylor was expected. But, it was followed by a surprising Bh******odddd. 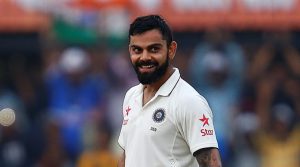 Didn’t see that one coming.

Nevertheless, Ross Taylor did learn a thing or two from Kohli during his time at Royal Challengers. Here is the actual video of what happened during the match.

But the aggressive captain Kohli rather seemed to be enjoyed it!